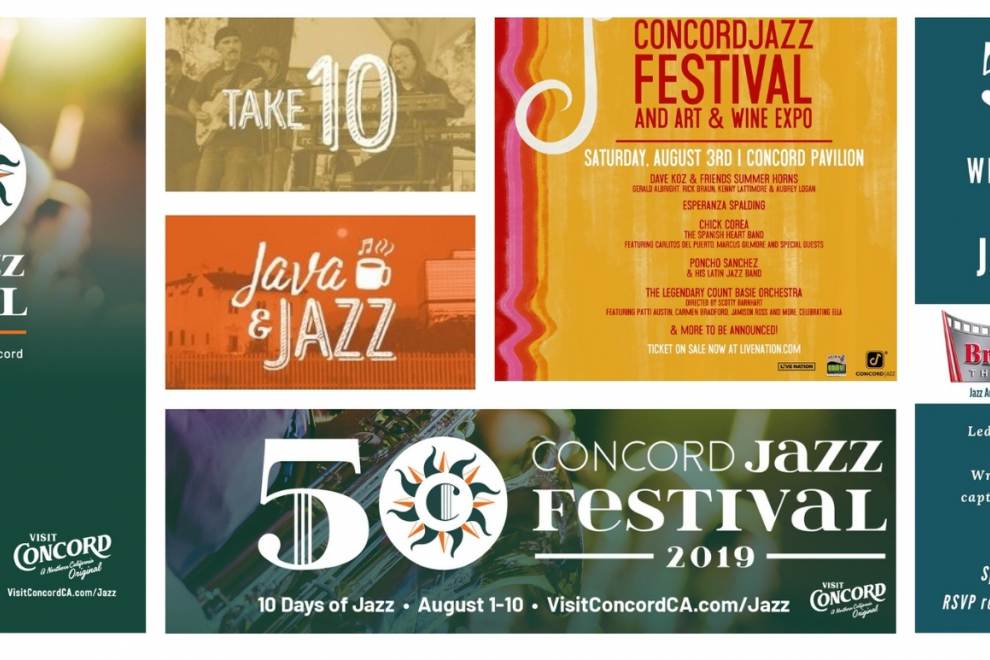 The Incredible 50-Year History of the Concord Jazz Festival

The Concord Jazz Festival started as a small outdoor music event in a city park during the summer of 1969 and has since grown into one of the premier jazz events in the country.

The Concord Jazz Festival started as a small outdoor music event in a city park during the summer of 1969 and has since grown into one of the premier jazz events in the country. After a 15-year hiatus, the festival is returning this summer to celebrate its 50th anniversary and bring some of the biggest names in jazz to the 12,500-seat Concord Pavilion. It promises to be one of the most memorable music festivals of the year.

According to Concord Jazz Festival historian Ellen Herdegen, the idea to start a jazz festival in Concord came from a local visionary, Carl Jefferson, a Lincoln/Mercury auto dealer. He was a loyal jazz fan and an avid collector, but he wanted to go beyond simply collecting records. He envisioned bringing a cultural event to the city by transforming a local summer fair into a top showcase for jazz music.

“Carl Jefferson was just a regular guy who got very involved in the community,” said Herdegen. "He wanted something cultural for Concord, so he got his buddies who owned businesses in town, city council, and the mayor together to put the first summer festival at a park.”

The first summer music showcase was called the “Jazz in the Park Festival,” and it was held at an undeveloped 8-acre field next to Concord High School. More than 17,000 jazz enthusiasts attended the first year, and the list of performers did not disappoint. Spectators enjoyed music from Vince Guaraldi, Stan Kenton, Jean Luc Ponty, Carmen McRae, Don Ellis, Mel Torme, and the Buddy Rich Band.

Six years after the first festival, Jefferson started a record label aptly named after the city that supported his enthusiasm—the venerable Concord Jazz Records. The internationally recognized label became known for the style called straight-ahead jazz, and it offered many of Jefferson’s favorite musicians an outlet for recording. After the successful launch of the record label, he moved his attention to finding a permanent facility to hold the annual festival.

Jefferson persuaded Concord city officials to support the funding to build an outdoor summer concert amphitheater. And on May 16, 1975, sitting on the eastern edge of Concord, the Concord Pavilion officially opened with a benefit concert featuring world-renowned jazz singer Sarah Vaughan and conductor Henry Mancini. The $4.5-million venue was built on land donated by homebuilder Ken Hofmann, and it was designed by architect Frank Gehry.

“I feel really fortunate to have had a front-row seat to watch Carl Jefferson, and others involved, make things happen,” Herdegen said. “Watching this evolve from an idea to a record company, and then a summer festival. (It shows) the power of one person—and that we all can make things happen if you put your mind to it.”

This year’s 50th-anniversary festival features a diverse all-star lineup with some of the biggest names in jazz. Featured artists include the first jazz artist to win in the Best New Artist Grammy category, bassist Esperanza Spalding. You’ll also hear the Chick Corea Spanish Heart Band, one of the biggest jazz names in the last 60 years, and the Grammy-nominated 18-piece Legendary Count Basie Orchestra.

Concord Boulevard Neighborhood Park, the home of the first festival, has been renamed the Dave Brubeck Memorial Park, after the city’s favorite son. His most famous number, Take Five, is the top-selling jazz single of all time, and it was also named the Concord’s “most treasured song.” Concord’s roots in jazz go far beyond Brubeck, and bringing the festival back will once again remind people of its storied tradition.

The 50th Anniversary of Concord Jazz Festival will be on Saturday, August 3, at the Concord Pavilion, where festival-goers can also enjoy the Art & Wine Expo that will be accompanying the festival. Doors open at 2 pm and the music will start at 4 pm. Tickets range from $39.50 to $149.50 plus applicable charges, including a limited number of general admission four packs while supplies last. You can purchase tickets here.

In association with this year’s festival, Concord will also be hosting several other events this summer. At the Concord Historical Society, the Java & Jazz series will offer participants coffee, pastries, and a discussion of all things jazz on three Saturdays from 10 a.m. to noon. On June 22, Frank Dorritie, a veteran performer, producer, and composer who worked many years at Concord Records, will share stories about recording sessions and the evolution of the industry. He’ll also share recordings from his private collection

On July 27, Ellen Herdegen will share a history of the festival, and on August 24, Dr. Matthew Zebley will take the stage to give some background on Dave Brubeck and perform with his band. Admission to each event is just $5 ($12 for all three events), and all proceeds benefit the Concord Historical Society. Visitors will receive a complimentary logo coffee tumbler with each ticket purchase.

To honor the city’s association with jazz, Concord is also hosting Take 10, which features 10 days of events preceding the festival starting on Thursday, Aug. 1. Most of the events are free and include concerts throughout the city, a trivia night, and social events.

It’s an exciting time to be a jazz fan in Concord. Take advantage of all that’s available this summer—and be ready for the big event on Aug. 3.

Written by Sylvia Sheehan for Matcha in partnership with Visit Concord and legally licensed through the Matcha publisher network. Please direct all licensing questions to legal@getmatcha.com.