This Week, Visit Concord looks at some of Concord’s best Baseball & Softball Players

Known for its nearly year round sunshine and mild winters, Concord is a paradise for outdoor sports. Baseball is traditionally a sport that needs many outdoor months per year to thrive. Batting cages and gymnasium based practices only go so far. To enjoy baseball you need to be outdoors breathing in the fresh air with the sun overhead.

The competitive nature runs deep for young athletes, and these local teams are a source of pride for the community. Even as the season reaches an early end, senior players and their passion for America’s favorite pastime deserve recognition.

It’s one… two… three strikes you’re out! We all know the drill, but this Spring, these Ugly Eagles are going to throw fast-- for a cause. Even before COVID-19 turned schools and the state on its side, two boys wanted to make a difference using the sport they love. In the winder, Eddie Curley and Joey Soberon decided they wanted to do something special with their senior season.

After contemplation, they decided to help Make-A-Wish and the non-profits vision for helping bring happiness to kids. Throughout the season, they would get pledges for their strikeouts throughout the season-- last year, the players had a combined 14 strikeouts. They hope to continue striking out the competition once schools are cleared to re-open.

“These 2 senior pitchers not only are really good pitchers but exceptional student/athletes,” said their coach Casey Coakley. “They both have earned division 1 scholarships to pitch.”

The coach explained how unique these student athletes are for their inventive money-raising ideas. “They had a lot of sponsors and were on pace to rack up a ton of strikeouts between them.”

To find out more information on Eddie and Joey's Make-A-Wish Fundraiser, or to make a donation click here. 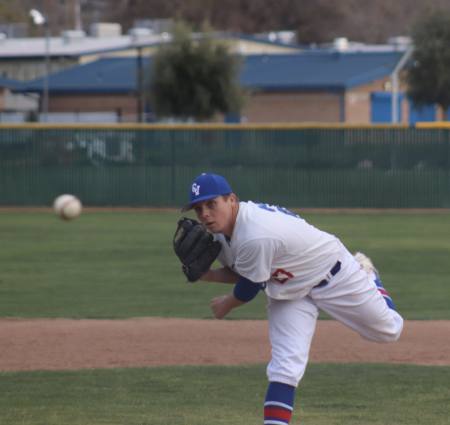 Next up to the plate, Concord High Baseball.

These senior Minutemen players have shown heart and dedication both to academia and to the sport they love.  Here are some words from their coaches:

Jonathan has been a 3 year varsity starter. His work ethic on the field is unmatched, as he has missed 0 practices during the season for all 3 years combined.

He has led our staff in innings pitched, wins and strikeouts every year at the varsity level, and has become a fixture in the middle of our lineup!

Ryan is a player that gets it done both in the classroom and on the field. He has carried a 4.0+ GPA every semester at Concord High School, as well as excelling on the field.

He jumped into our starting SS roll as a Junior and has been a fixture there every game.

His defense during the 2020 season was impeccable, as he committed zero errors in 35 chances.

At the plate, Ryan anchored our lineup from the 3 position, as he was one of our leaders when it came to OBP, RBI's and runs.

Amber has been a four year starter on varsity. Her first three seasons she played third base, and this year she moved over to play shortstop. Amber has so much passion for the game of softball, and it is evidenced by her work ethic at practice as well as by her countless hours she has spent on her own time getting better at her craft. Amber has a funny personality, but when she steps on the field she is all business.

She has done an amazing job as a lead off batter for our team the past two seasons. In four games this year, she was batting .533, and led the team in hits, doubles, and runs scored.

Amber has always excelled in the classroom. She has a 3.71 Total GPA, and she earned a 3.80 in the most current grading period. She will be attending the University of Iowa on a softball scholarship next year.

Madi is a force to be reckoned with at the plate. When she makes contact with the ball, it is hit HARD.  She was batting in the #3 spot this year, and was one of the top leaders in RBI's, OB%, and OPS.

Madi has been a three year starter on varsity. During that time she has mainly been a starting pitcher, but has also played other positions including 3rd base, 1st base, and outfield. In the 4th game we played this year, she pitched a No-Hitter against Monte Vista (it was almost a Perfect Game - just one walk in the 4th inning!). Her confidence and control in the circle the season was the best I have seen since she came into the program. In 17 innings pitched, she had 20 strike outs, and an ERA of 0.824.

In previous seasons, she has led our team in homeruns and Slugging %.

Madi also excels in the classroom. Her cumulative GPA is a 4.48, and it is no surprise that she will be attending Harvard next year on a softball scholarship.