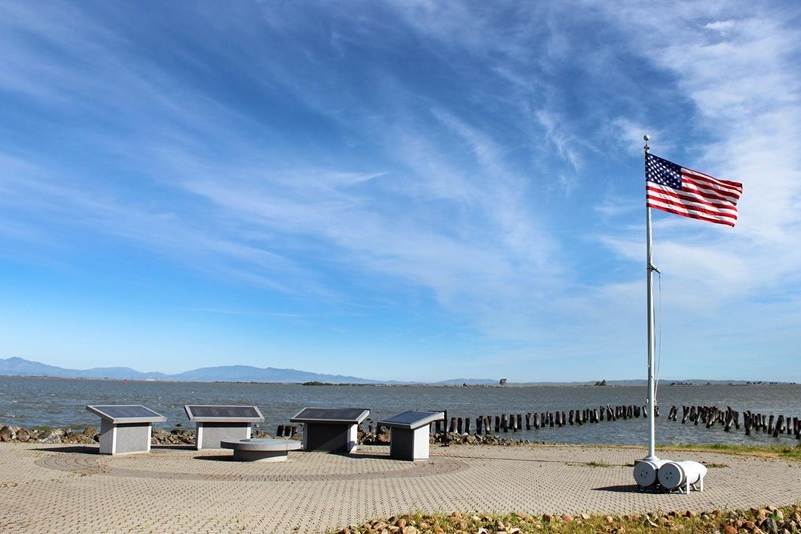 The 75th Anniversary of Port Chicago: Remembering the Fallen

Constructed in 1942, following the attack on Pearl Harbor, the naval magazine was named after the nearby town of Port Chicago. It was at this pier where officers and sailors would unload torpedoes, bombs and depth charges from train cars and load them onto military ships to be sent out for war. It quickly grew to become the Navy's largest ammunition shipment facility on the West Coast, and was the key to success for US armed forces serving in the Pacific Theater.

On July 17, 1944, the naval magazine shuddered with a devastating explosion that killed 320, injured 400 and decimated S.S. Quinault Victory and S.S. E.A. Bryant--two pier and cargo ships that were being loaded at the time. The explosion stretched towards Port Chicago, heavily damaging the town.

A majority of the casualties were young African American sailors who served in racially segregated work units and experienced differentiating treatment because of their race. 258 of the surviving sailors refused to return to work due to unsafe working conditions and the protest of racial discrimination. 50 were charged and convicted of mutiny, but these conviction sparked public protests and prompted historic steps towards racial integration in the Navy.

Established in 1992, the Port Chicago Naval Magazine National Memorial marks the site of the Port Chicago explosion, the worst stateside disaster in the United States during World War II. The memorial was dedicated in 1994, and was administered by the National Park Service.

The memorial sits on the shoreline of Suisun Bay overlooking the remnants of the exploded pier. A paved plaza contained four granite stones, engraved with the roll-call of the dead. Along a path leading from the parking area to the plaza, a gnarling metal piece of the wrecked ship serves as a reminder of the event. This entire memorial is presided by a nautical flagpole bearing the American flag, a tribute to the men who served and died at the site.

On July 17, 2019, the 75th Anniversary of the Port Chicago explosion was commemorated. The anniversary highlighted the three themes that compelled the nation to set aside Port Chicago as a place of national remembrance: the role that the naval magazine played in the Pacific Theater war effort, the loss of life caused by the tragic explosion, and the poignancy of the social justice struggles that ensued after the explosion.

In Honor and Memory of...