A Taste of Fall

Fall means everything brew-tastic for beer lovers, from classic lagers to frosty IPAs, and Concord brew spots offer plenty of reasons to raise a glass this October

Be sure to download the Contra Costa County Beer Trail Passport and check-in at each of these locations to win Beer Trail merchandise from Visit Concord.

SIDE GATE BREWERY AND BEER GARDEN

The new kid on the block, Side Gate Brewery opened last month and is already creating lots of buzz and new releases each week. They serve craft brewed beer made on site in their taproom.

Enter through the Side Gate to imbibe in your new favorite lagers, hoppy ales, and seasonal selections. You’re encouraged to bring food from any of the great restaurants around downtown Concord or a picnic from home (just no outside alcohol, please.)

Epidemic Ales brewed the official Oktoberfest beer of Concord: "Schwarzhammer" Schwarzbier (Black Lager) released on October 2nd. Mayor Tim McGallian tapped the ceremonial first keg with the Epidemic brew team kicking off Oktoberfest at the brewery.  Get the limited edition 2021 Epidemic Ales stein ($10) and Epidemic’s Oktoberfest black lager beer on tap and in cans at the taproom or online throughout the month of October.

Halloween Party, Saturday October 30th (12pm-10pm). They’ll be releasing the annual Concord VIBE DIPA (brewed in collaboration with Side Gate Brewing and City of Concord) on tap and in cans to go on the same day. Pop-up food vendor "The Eating By John" will be serving up a special menu. Come in costume and join their costume contest. All ages welcome.

Geeks Who Drink Trivia, every Thursday at 6:30pm.

The Hop Grenade is now open Monday through Sunday and featuring beers that are hop forward including pale ales, IPAs and double IPAs. Look for The Hop Grenade Staff Six Pack Pick each week for suggestions from those in the know! Here you get lots of variety with taps changing every week, tasty beer bites and seating indoors and outdoors.

The Tap House is also known for their amazing food. Follow them on Facebook to see what’s next on the grill.  They have indoor and outdoor seating and feature free live music every Sunday. 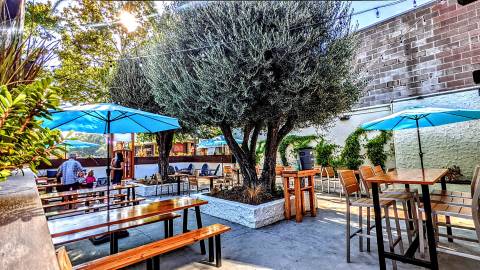