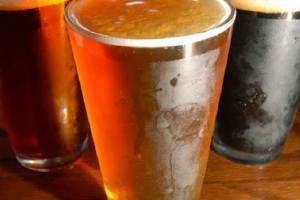 As one of Contra Costa County’s most culturally diverse cities, Concord, California, offers residents and visitors alike a satisfying blend of urban vitality and rugged nature.

One of the best ways to experience Concord is to spend a day exploring the city’s abundant outdoor spaces, capped off with thirst-quenching crafts brews and tasty bites at one of its lively taprooms. We’ve put together four outdoor adventure and ale pairings that give you a good taste of what makes Concord so special.

Today is #IPAday2018 & we currently have 3 delicious IPA's on tap! Stop by our taproom today to try Brute Squad, our Brut IPA, Jucifer, our Strawberry Vanilla Milkshake IPA, or Cosmic Meltdown, our single hop Citra IPA. See you at 3:30! #IPAday #NationalIPADay #IPA

The South Loop Trail area of Lime Ridge is craggier and more varied, making this popular with mountain bikers. As a protected wildlife zone, dogs are not allowed here, even on leash. Starting from the small parking area off Ygnacio Valley Road, the main loop is a little more than five miles, but you’ll discover plenty of smaller, rambling trails that make it possible to hike different distances and degrees of difficulty, including one that leads to magnificent panoramas of Mount Diablo.

As unique as Lime Ridge is to the East Bay, so too is Epidemic Ales to the area’s craft brew scene. Opened in 2016, this taproom brews and bottles its own beers that leave a lasting impression, not only in taste, but also in name, with beers like Patient ‘Zero’ Double IPA, Lager at World’s End, and Devil’s Daughter Strawberry Pale Ale. Located in an industrial area off Highway 4 (you’ll need to drive, rideshare, or bike from any of the Lime Ridge trails) and open Wednesday through Sunday, Epidemic Ales is an ideal spot for an afternoon beer indulgence. Patrons can try out local food trucks scheduled on the weekends, and the brewery fills outside growlers so you can enjoy their bold creations at home.

For a more relaxing pace on mostly paved pathways, take a stroll or bike ride on the Contra Costa Canal Trail, which features a horseshoe-shaped route through the urban and suburban landscapes of Concord and neighboring towns. Following its namesake canal, this trail traverses several parks and links to other regional paths, including the Iron Horse Trail. Skirting the eastern edge of Lime Ridge along Citrus Avenue, Navaronne Way, and Miguel Road, the trail officially ends at Willow Pass Community Park. Entering the park, you can take a left on Salvio Street and follow that about a mile to Concord’s landmark Todos Santos Plaza, where you’ll find refreshment at the upstart watering hole, Hop Grenade.

A casual crowd-pleaser, Hop Grenade is a bottle shop as well as a taproom that is best experienced by grabbing an outdoor table and soaking in the vibrancy of Todos Santos Plaza. An adjacent water fountain, colorful umbrellas, and lights strung across the outdoor patio (dogs allowed!) give this an exciting European vibe. The beer selection, displayed on a digital screen above the bar (including how much remains in the keg) is top notch, with strong representation from local and regional brewers. While Hop Grenade is best known as a place to imbibe, its artisanal flatbreads, sausage bites, and other small eats will quell any stomach grumblings.

Another urban/suburban trail is BART Linear Park that, as its name suggests, starts at the North Concord/Martinez BART Station and ends at the Concord BART Station. This flat, easy trail—suitable for walking, biking, or jogging—runs along Port Chicago Highway. Along the way is 18-acre John Baldwin Park, enjoyed by many for its children’s play area, dog park, basketball and bocce courts, softball field, and more. At Salvio Street, turn right and you’ll run into Todos Santos Plaza where you’ll find the perfect excuse for an extended stay at Hop Grenade’s next door neighbor, E. J. Phair.

As the longest continuously operating brewery in Contra Costa County, E.J. Phair has been an integral part of the Concord beer scene since before beer became hip. Favorites include the award-winning Shorty’s Revenge and the Ditzy-Blonde Ale, but there’s something to please any palate. As a restaurant as well as an alehouse, E.J. Phair serves up classic pub fare (including an impressive brunch menu on the weekends) and is the place to go if you’re craving a hearty meal along with your brew. Although its traditional interior is large and inviting, sunny afternoons and warm nights make dining and drinking al fresco hard to resist. On Tuesday nights, test your smarts and couple your beer of choice with a game of competitive trivia.

In Contra Costa County, the granddaddy of outdoor adventure is Mount Diablo, the sacred mountain of the Miwok Indians and now cherished by Bay Area hikers, mountain bikers, equestrians, and nature lovers for its varied terrain and levels of difficulty. While not officially in Concord, this peak (the third highest in the San Francisco Bay Area at 3,849 feet) dominates the skyline, and many of its trails are easy to get to from Concord via the North Gate Road entrance.

Of course, the ultimate Mt. Diablo experience is climbing from base to summit via the 7.3-mile trail starting at the Mitchell Canyon Staging Area in Clayton. At the peak you’ll find an impressive visitor center and heart-stopping views that on a clear day include the Golden Gate Bridge and Farallon Islands to the west; Mount Hamilton to the southeast; Mount Loma Prieta in the Santa Cruz Mountains; and even the Sierra Nevada and Cascades to the north.

If you don’t have the time or stamina to tackle the strenuous summit hike but still want to enjoy the views, you can always drive. There are plenty of trails to explore at the top, including the easy, .7-mile Fire Interpretive Trail. Don’t miss Rock City where visitors of all ages will enjoy meandering the surrounding nature trails, exploring the sandstone caves, scrambling over boulders, and climbing Sentinel Rock for impressive views.

While Concord has had Mt. Diablo in its backyard long before humans were around, a new addition to the city’s landscape is the Concord Tap House, which “soft-launched” in early August 2018 in midtown Concord on Clayton Valley Road. Casual and friendly, the Tap House features 24 rotating craft beer taps with a focus on local and Pacific Coast brewers, as well as curated wines. The diverse brew selection is intended to provide something “new and fun” for every type of beer drinker, whether you’re into trendy sours or classic IPAs, while the front deck area creates a warm and welcoming atmosphere that belies its nondescript location. A food menu is being gradually rolled out, and given the tap room’s proximity to the bike-friendly Iron Horse Trail, the owners are looking at dedicating an outdoor wall space to hanging bike storage (think bike rack that doubles as temporary art.)

Written by Karen Bakar for RootsRated Media in partnership with Visit Concord.